What is the purpose of education in Serbia? 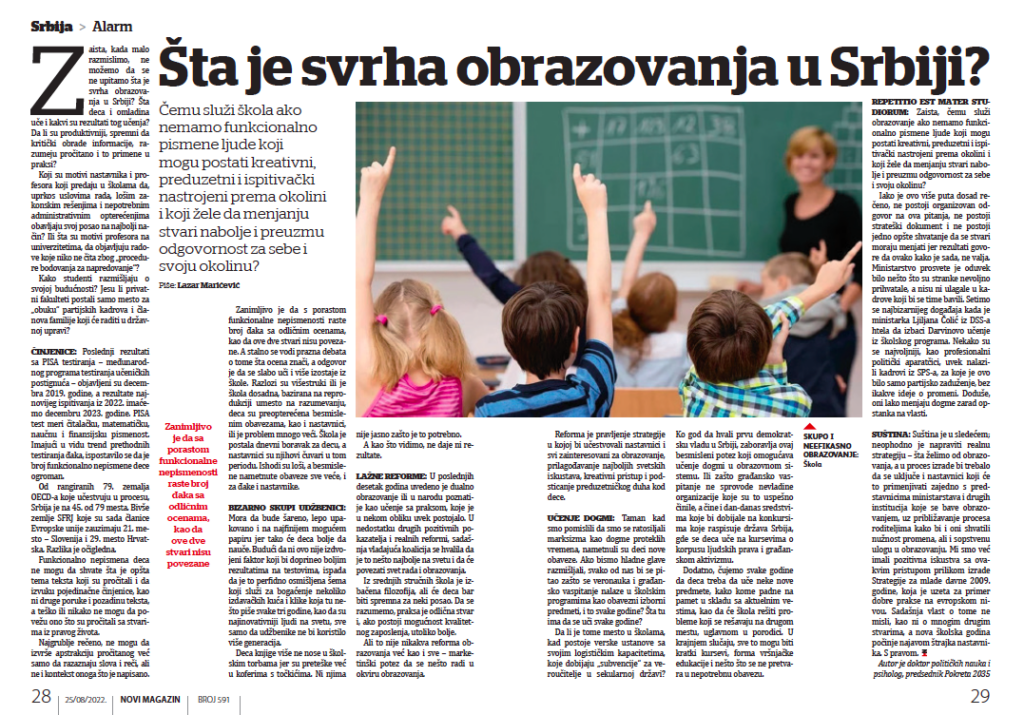 What do children and youth learn and what are the results of that learning? Are they more productive, ready to critically process information, understand what they read and apply it in practice? What are the motives of teachers and professors who teach in schools, to perform their work in the best way despite the working conditions, bad legal solutions and unnecessary administrative burdens? Or what are the motives of professors at universities, to publish papers that no one reads, because they need t for the promotion? How do students think about their future? Do private universities just „educate“ political activists of ruling party and their family members just  to have formal paper to work in the state administration?

Instead of the school providing functional literacy, our students, teachers and parents face a lack of strategic planning and fake reforms, overpriced books, too much unnecessary administration for teachers and useless seminars and learning religious dogmas, as shown by the PISA test results. Of the ranked 79 OECD countries participating in the process, Serbia is in 45th place out of 79. The former countries of former Yugoslavia, which are now members of the European Union, occupy 21st place – Slovenia and 29th place Croatia. The difference is obvious.

The Ministry of Education has always been something that political parties reluctantly accepted, and they did not even invest in personnel to deal with it. Somehow, the most willing, as professional political apparatchiks, were always the cadres from the SPS, for whom this was only a party assignment, without any idea of change.

It is necessary to create a realistic strategy – what we want from education, and teachers should be included in the process of making it.  It will be applied together with representatives of ministries and other institutions that deal with education, while bringing the whole process closer to parents so that they too understand the necessity of changes and own role in educational process. We have already had positive experiences with this approach, during the preparation of the Youth Strategy back in 2009, which was taken as an example of good practice at the European level.