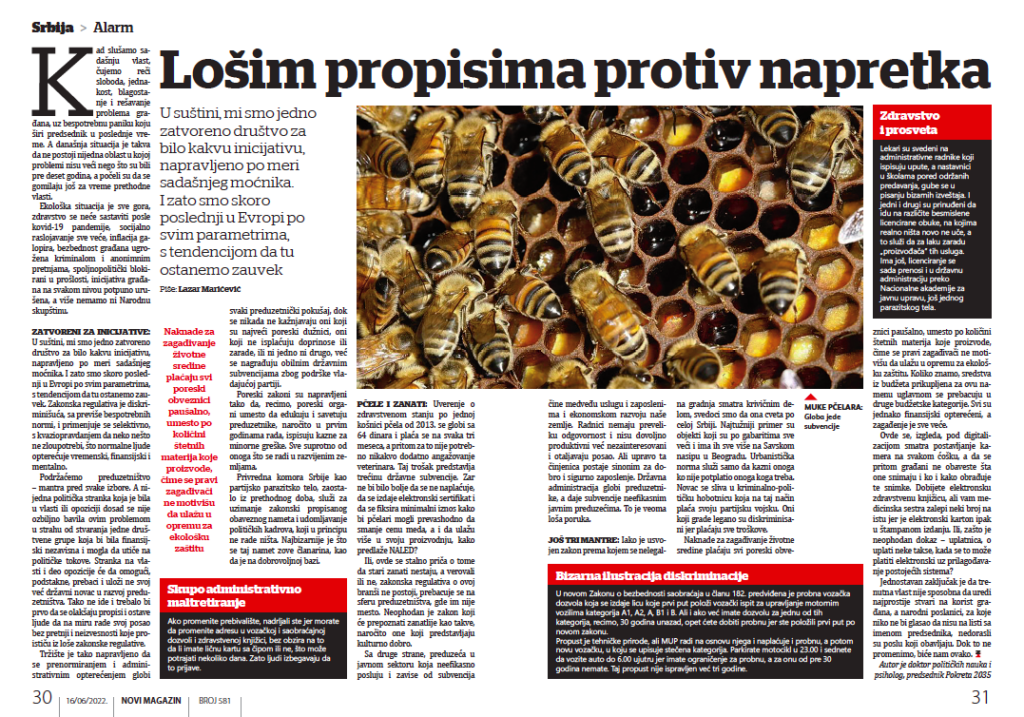 The party in power and part of the opposition will enable, encourage and invest, not their own, but the state’s money, in the development of entrepreneurship. It doesn’t work that way and the regulations should first be eased and people should be left alone to do their jobs without the threats and uncertainties that arise from bad legislation. The market is made in such a way that every entrepreneurial attempt faces unnecessary administrative tasks, to much expenses in the start up year, while those who are the biggest tax debtors, those who do not pay contributions or wages, or neither, are ever punished, but are rewarded with abundant state subsidies, because of their support for the ruling party. Tax laws and culture are made  in the way that tax authorities instead of educating and advising entrepreneurs, especially in the first years of work, issue fines for minor mistakes. Everything is the opposite of what has been done in developed countries.

On the other hand, companies in the public sector that operate inefficiently and depend on subsidies do a disservice to both the employees and the economic development of our country. Workers do not have too much responsibility and they are not productive enough, but disinterested and procrastinating. But this very fact becomes a synonym for good and secure employment.

Doctors are reduced to administrative workers, which reduces their time with patients and school teachers, in addition to giving lectures, are writing bizarre reports. Both of them are forced to go to various meaningless licensed trainings, where they really don’t learn anything new, and this serves to make easy money for the „creators and implementors“ of those services.

Although illegal construction is considered a criminal offense, we are witnessing that it is flourishing all over Serbia. The saddest example are the buildings, which are getting higher and bigger and there are more and more of them on the Sava Embankment in Belgrade. The urban norm serves only to punish the one who did not bribe someone. Those who build legally are discriminated because they pay all the costs.

Fees for environmental pollution are paid by all taxpayers, flat-rate, instead of according to the amount of harmful substances they produce, which does not motivate real polluters to invest in equipment for environmental protection. As far as we know, budget funds collected for this purpose are mostly transferred to other budget categories.

Here, it seems, digitization is considered to be the installation of cameras on every corner, without citizens being informed of what they are recording and who and how uses those recordings.

If you change your residence, you’re in problem because you have to change the address on your driver’s and traffic license and health card, regardless of whether you have an ID card with a chip or not, which can take several days. That’s why people avoid reporting it.

Current government is incapable of arranging the simplest things for the benefit of the citizens, and Members of Parliament for whom no one would vote, if they were not on the list with the president’s name, are not up to the job they perform. Until we change that, it’ll be like this.